Says Zachary, my 3 year-old squirt, in response to my inquiry about why there was a lot more than one color out (as he was attempting to break the ‘One color at a time’ rule).

He’s funny. He’s at this seriously hilarious stage when half the stuff he says makes no sense and the other half is naughty because he repeats what he heard from his older brothers.

And he won’t. Stop. Talking.

Except when you want him to talk.

Today, for example, I tried striking up a conversation later on, about play-doh.

“Hey Zachary. What do you like to build out of your play- doh?”

“I’m not talking to you wight now, Mama. You’re annoying.” 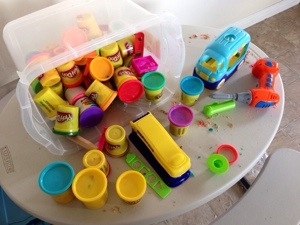